THE UNSTOPPABLE RISE OF
BRITISH JAZZ

We teamed up with two time MOBO award- winning Jazz drummer, Moses Boyd on an exclusive shoot and interview.

THE UNSTOPPABLE RISE OF BRITISH JAZZ

We teamed up with two time MOBO award- winning Jazz drummer, Moses Boyd on an exclusive shoot and interview.

Five years ago, if you'd asked someone about "British jazz" they would have assumed you were talking about the post-war golden age of jazz in the UK. But since 2015, there has been a stunning resurgence in the genre. Young people are connecting with jazz again, lured by the unpredictability of it. This fiery spirit is alive in a new generation of young British jazz artists like Ezra Collective, Shabaka Hutchings and Nubya Garcia, who are being praised everywhere from The Guardian to The New York Times to Rolling Stone Magazine. It all begs the question: where did this new wave of jazz come from and where is it going?

South Londoner Moses Boyd has been a key catalyst for this change. The two time MOBO Award-winning jazz drummer has become a huge name in the UK scene thanks to his critically acclaimed albums, both as a soloist and in the duo Binker & Moses. He remembers when the genre was restricted to the back rooms of clubs. These days, he and fellow jazz peers are being booked for line ups alongside Four Tet, Jon Hopkins and Little Simz. “Now kids that are like 16 or 17 years old are engaging with this culture,” he says. “The barriers are coming down, they don’t have to find it in different spaces anymore.”

Boyd cites many reasons for this, reasons he calls micro-changes that range from the rise of streaming to the growth of social media. But one thing he can’t emphasise enough was the impact of Kendrick Lamar’s 2015 album, To Pimp a Butterfly. “It was almost like a statement: let’s rejoin jazz and hip-hop again.” Soon, jazz influences were becoming prevalent on releases from Earl Sweatshirt and Tyler the Creator.

But the genre wasn’t just finding itself a home in mainstream rap. Nine months after To Pimp a Butterfly, David Bowie’s final album, Blackstar, was released and shot straight to number one selling over half a million copies. It was packed with jazz musicians like Donny McCaslin and Jason Lindner. “I think that album took it to a whole new level,” says Boyd.

But all this mainstream attention on jazz would have been meaningless had the rising generation of UK musicians not also built their own thriving community of support and collaboration. In East London, DIY nights, like Church of Sound in Clapton and Dalston’s Total Refreshment Centre became hubs for collaboration and performance, as have South London clubnights like Steez and Steam Down. It’s no longer unexpected to hear major DJs like Floating Points and Four Tet dropping songs like “Rye Lane Shuffle” by Moses Boyd and others in their sets.

The question is: what makes this new British jazz sound so unique? “I guess it’s the DNA of it; London’s unique,” says Boyd. “There’s a stronger West Indian Diaspora in the music and the rhythms. London has that experience where you can go to Brixton and feel like you’re in little Jamaica, or North London and feel like you’re in Turkey. I feel the music is a reflection of that wider integration.”

UK rappers like Little Simz and Kojey Radical have begun to incorporate jazzy inflections into their sound, and Boyd thinks it’s a matter of time before we have a true UK rap crossover moment. “I feel it’s gonna come from the next crop: your Octavian’s, your Slowthai’s, your Dave’s. The younger rappers who are a bit more switched on to what’s happening.”

For now, Boyd is focused on finishing off a brand new album and his new residency on BBC Radio 1Xtra. Instead of having another show of simply music and talking, he has created a fluid mixture of interviews and improvised jams. “Every show I’ve tried to make it unique. My thing is, if you put out a vibration, you get stuff back. And now I’m seeing more DJs changing their show formats because it made an impact. They are doing more live stuff, which is great,” he says, with a smile. “I went in guns blazing!”

Inspired by heritage baseball design, this coaches jacket in all over striped navy on white is quality piece designed for those who love to bring vintage style into their outfit. Features baseball jersey style stitching to opening, snap front fastening and patch pockets.

Sporting grey front panel and visor, this New York Yankees 9FORTY comes complete with white Yankees logo to front, and mesh to rear. Perfect for the summer months, the look is completed with Yankees script to the fabric strap.

Inspired by the explorer look, this bucket hat is just perfect for the summer months. Bringing together streetwear style with vintage practicality, it's presented in an all over black colourway.

This button-up Oakland Raiders short sleeved tee is a truly authentic looking piece that's perfect for game day or street wear alike. It comes in all over black, and features Raiders script in white to front, along with the official NFL badge to the right sleeve, and the New Era flag to right. 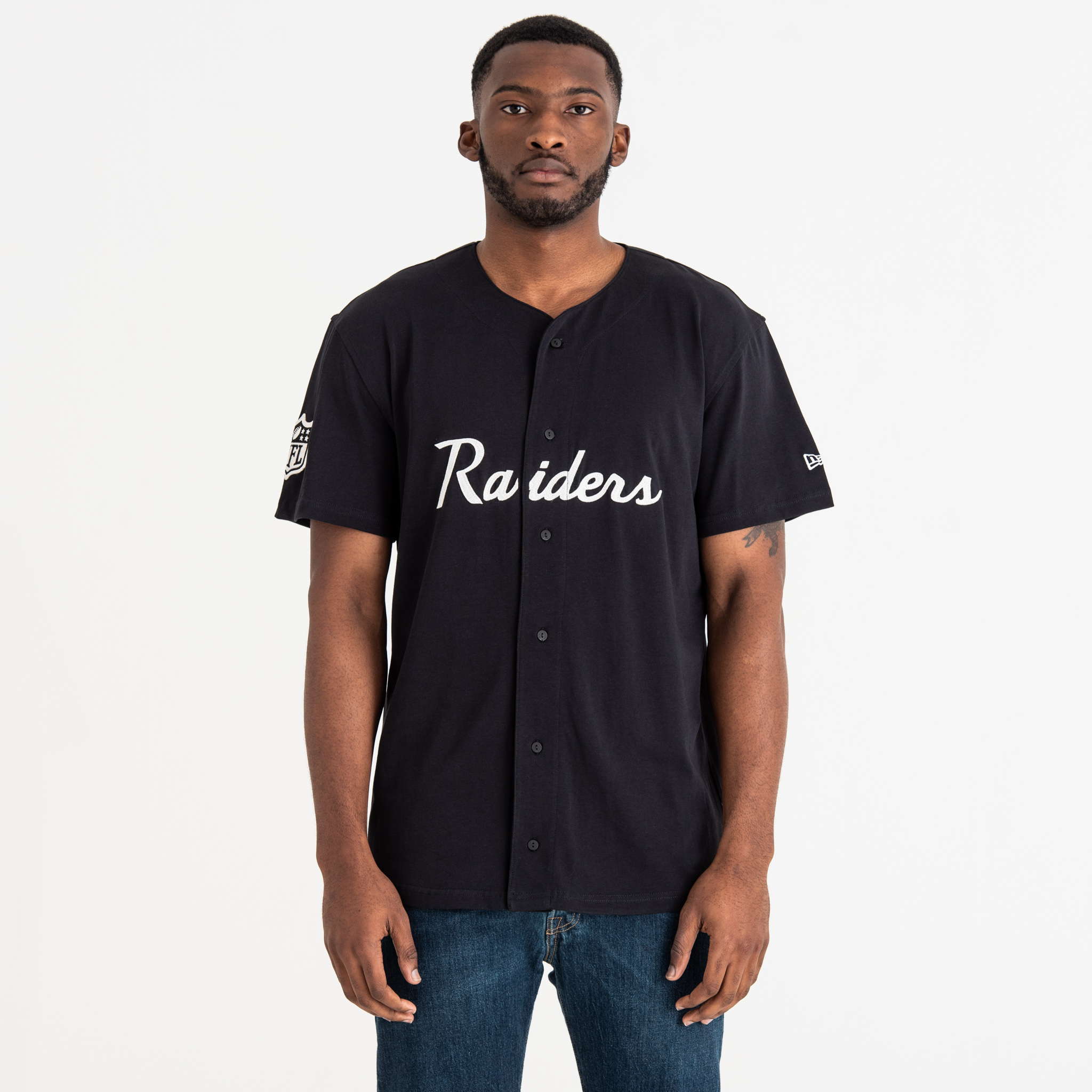 Product ID: 11179866
Read all about it! The quality of this superb Flag Collection cap is there for all to see , summing up almost a century of excellence. Every one of the striking contrast stitches embodies our trademark attention to detail, from the stand-out seam stitching to the eight rows across the curved visor. Crafted with a contoured crown and fully adjustable thanks to the velcro back strap, it is engineered for movement and comfort. Finished with a New Era flag to the lower left hand side. 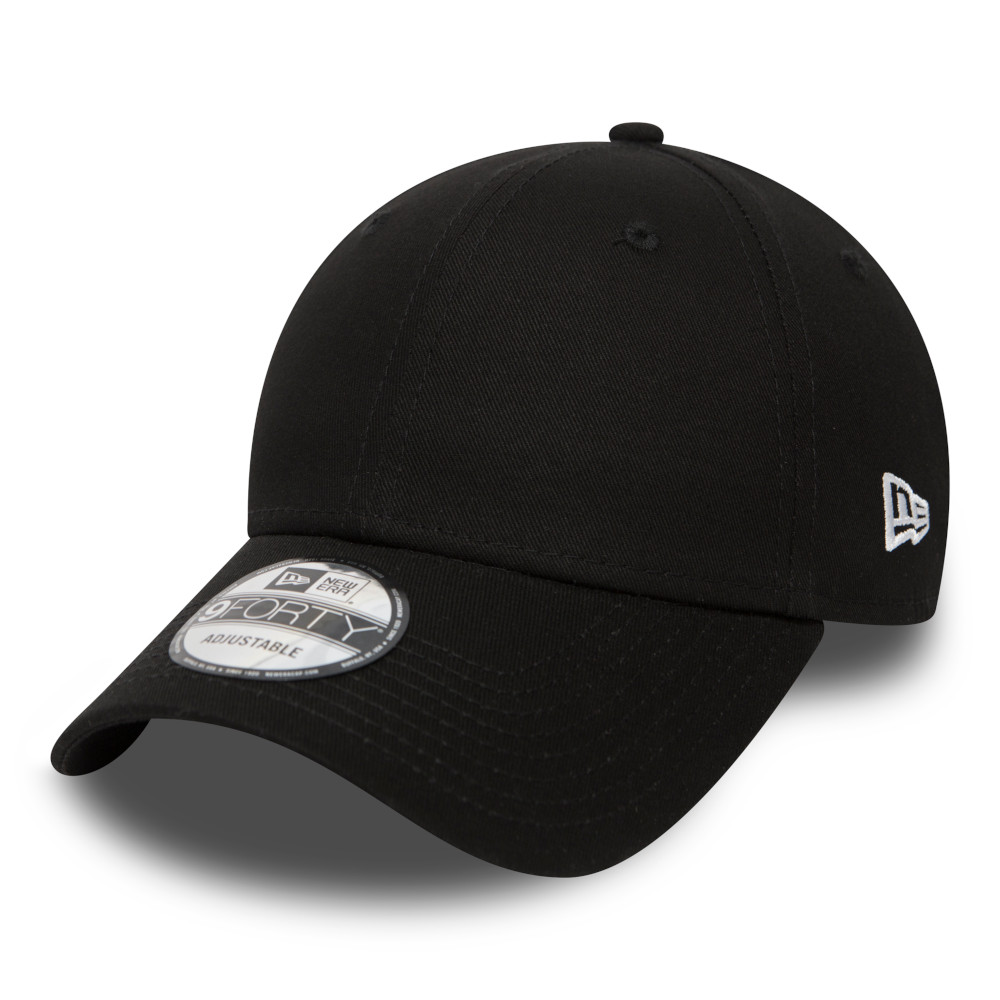 Get behind your favourite baseball team this season with this black Detroit Tigers T-shirt from New Era. Taking inspiration from classic American college style apparel, it’s perfect for creating an edgy look this season.

Stay up to date